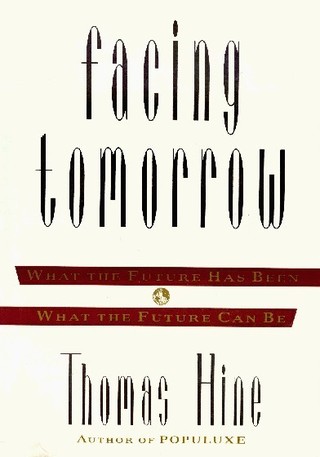 Facing Tomorrow is, unfortunately, out of print, but it can be ordered online through amazon.com. I have a limited number of copies of the original hardcover edition available for sale at $20 apiece, including domestic shipping. (I'd be happy to inscribe them.) Use the link below to email me if you're interested.

Here are some excerpts from Chapter 1, "The Shape of the Future":

For at least two decades, no compelling, comprehensive vision of the future has captured the American imagination. Our culture is like a child raised without adults: We have no idea what we will be when we grow up. We don't know what to tell our own children, though we dimly suspect we are setting a bad example. We condescend to past visions of the future--the progressivist utopias of the turn of the twentieth century, the streamlined dreams of the 1930s, the jet age exuberance of the 1950s. But we have nothing to take their place.

Instead our popular culture is filled with tainted dreams, manipulated horrific fantasies planted in the minds of innocents...Today we know all about what was wrong with the visions of the past are are, we tell ourselves, more realistic. But we are more limited too. Besides, there's no evidence, outside of the movies, that a refusal to dream prevents nightmares from coming true.

The word "future" as it is used here does not mean a static utopia or a set of products that can be ordered from a catalogue...What is lacking is a sense of the future as a project, a work of collective imagination and aspiration.

All consideration of the future is about the present. At times people look to the future to provide deliverance from the horrors of their own time, while at others they look ahead from good times to still better ones. Some have argued that the future is an age-old conspiracy of politicians, religious leaders and bankers to acept misery now in the hope of future rewards that will never come. That may, at times, be true, but it can hardly be the whole story. We look to the future to give moral weight to present actions. Before succeeding generations can live with the consequences of what we do, we must ask whether we can live with ourselves.